Fantasy Island is directed by Jeff Wadlow and stars Michael Pena, Maggie Q, Lucy Hale, Austin Stowell, Jimmy O. Yang, Portia Doubleday, Ryan Hansen, and Michael Rooker. The movie is a horror adaptation of the popular '70s TV show about a magical island resort. This is from the same writing and directing team and lead star of 2018's Truth or Dare and it is worse. Fantasy Island is an unintentionally hilarious excuse for a horror movie. You can see every scare coming it's people backing up slowly and the camera waiting for them to turn around, so they can pan to something that's behind them. It's the sound going out of the mix and you know a jump scare is about to happen and none of them are effective.    Every scene is like somebody explaining their entire lives to you. It's a constant series of twists and reveals and none of them are shocking. Every time one of them happens the person has to turn around and basically look at the audience and explain everything to us like we're fucking children. I'm not joking this movie is nothing but explaining. Every single choice that's made in the plot is just a long series of explanations as if we couldn't figure things out on our own.    Michael Pena plays the evil orchestrator of events on this island. He is really bad in this movie everyone's pretty bad in the movie. Maggie Q's storyline is so pointless. For most of the movie, her storyline is about regret, and she gets that opportunity again and spends a large portion of this movie just lounging around on a beach with a daughter she always wished she had. Lucy Hale's storyline is she wants revenge on a childhood bully. One of the other people wants to be a soldier, so he is off in a battle somewhere. The movie cuts back and forth between the different stories and the tone is so off and so jarring. I never felt like I was watching a horror film or a fantasy movie. The movie also has one of the most nonsensical plot twists I've ever seen. It makes you question everything you just watched even though the movie's obsessed with explaining all of its twists to you like it's afraid you won't understand. Even with all of that explaining baggage the twists still doesn't make any goddamn sense. The only mystery is how the fuck this movie got made.  0 out of 5 stars for Fantasy Island. I hope you enjoyed my review. 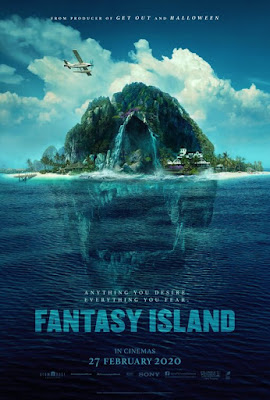